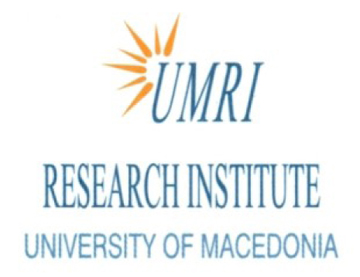 The University Research Institute of Applied Economics and Social Sciences was established pursuant to the Presidential Decree52/8.3.1996, Government Gazette 46 Vol. A. The following four (4) Departments of the University of Macedonia participate: Department of Economics, Department of Business Administration, Department of Accounting and Finance, Department of International and European Studies, as well as the Municipality of Kalamaria and the Association of Insurance Agents of Northern Greece.

According to its founding Presidential Decree, the Institute aims to: a) adopt and develop research programs concerning the economic and social structures and developments, as well as the cultural traditions and particular features of the Greek people in comparison with the peoples of the European Union and the Balkan Peninsula; b) organise and deliver scientific seminars, conferences and workshops on economic, social and political considerations and data related to Greek people, the people of the European Union and the Balkan countries; and (c) award  titles respectively.

The Institutes’ action is considered particularly important as it aims to strengthen the University's connection with the Greek society, economy, business and production, but also to substantially enhance the economic cooperation of EU countries. This is reflected in research activities and programs conducted by the University Research Institute, which are presented below.

The Public Opinion and Market Research Unit was established with the aim of systematically gathering primary material and enhancing the University-produced applied research in the scientific fields investigated by the University Departments. Depending on collaboration types, research results are often cited in the press and media, while they are offered for further academic, political and social analysis. Public Opinion and Market Research Unit (http://www.poru.eu/undertakes quantitative and qualitative public opinion surveys. In particular, it undertakes:

a) Telephone Interviews, the Unit has a fully equipped telephone research laboratory where all research processes are supervised by specialized scientific and technical staff.

b) Postal surveys, in cases where the subject of the survey or the characteristics of the sample members require the sending of questionnaires.

c) Internet surveys, The survey is carried out by e-mail and is fulfilled by completing structured questionnaires on an internet site that is properly designed and supervised by the Unit.

d) Focus groups, groups of respondents submit their views on the subject under investigation through the guidance of an experienced Unit Coordinator.

e) In-depth interviews, selected respondents participate and submit their views to a trained Unit researcher, in order to spontaneously record individual opinions and attitudes and investigate the causes of specific individual behaviours.

Since its first operation, the Public Opinion and Market Research Unit has carried out more than 160 surveys on behalf of various private and public bodies, academic researchers and national or foreign organizations.

The first summer school was organised in July 2018 under the title: “1st Thessaloniki Summer School in Research and Computational Methods”.

b. Price and Competitiveness Observatory

II. Apart from the research activity of the above two research structures, the University Research Institute has shown a rich work in promoting research, conducting research projects, organizing conferences and workshops, implementing educational programs as well as publishing studies. Examples include the following:

a) The annual conference "International Conference in Applied Theory, Macro and Empirical Finance (AMEF)" which took place in 2016, 2017 and 2018 and was organized by the Department of Economics of the University of Macedonia.

(b) The “Annual Meeting of the Association of Southern European Economic Theorists” held in 2016 by the Department of Economics of the University of Macedonia.

(c) Since 2014 it has been the financial manager of the annual conference "International PhD Meeting of Thessaloniki in Economics" held every summer by PhD candidates of the Department of Economics of the University of Macedonia.

e.  The University Research Institute has published or contributed to the publication of the following editions:

The Commission's Activities for the Promotion of the Greek Language and Culture (1994 - 2004).